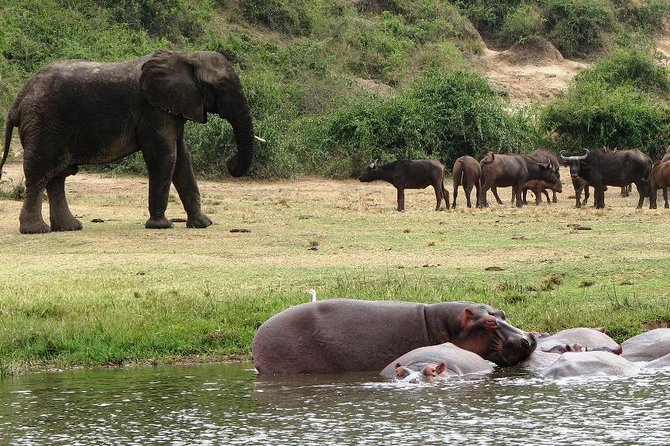 This is an amazing destination to go for Safaris and tours while in Uganda. Queen Elizabeth National Park ranks high as far as Uganda’s great offered Wildlife. And this is because of its evidenced Wide range of different Wildlife Species habited.

If you are more interested in a variety of unique species of Wildlife endeavor. To visit this exceptional tourist site for a fantastic experience.

Queen Elizabeth National Park ranked among the top ten must-visit Uganda’s National Parks geographically located in the Western Part of Uganda. Along Uganda’s border with the Democratic Republic of Congo. The boundaries of the Park includes the Kazinga Channel. Which connects the two lakes named Lake George on Uganda side and Lake Edward on Democratic Republic of Congo side.

The nearest other Parks to this destination. Include Bwindi Impenetrable National Park and Kibale Forest National Park

The best way of accessing Uganda in the Southwestern particularly traveling from Kampala by road. Kampala- Masaka-Mbarara highway  the best-recommended route including the en-route stopover at the equator in Kayabwe before reaching Masaka town.

The stopover at the equator specifically associated with a brief explanation about the equator. Photos when posing at the equator and snacks, then after continue with the journey up to the Park. Lunch  provided en-route in Mbarara town.

It usually takes about 7-8 hours for the drive from Kampala to Queen Elizabeth National Park. But usually depending on speed used, nature of climatic conditions, traffic along the way, and included stopovers. The journey  characterized with Enroute sightseeing of landscapes, grasslands and more.

However if you are a kind of a person who is not used to long-distance drives. Air transport means your suitable option to go. Always private charters arranged from Kajjansi airstrip or Entebbe airport up to Mweya airstrip in Queen Elizabeth National Park.

What to see in Queen.

The park regarded as a haven for bird watching with over 600 bird species recorded sightable in its major birding hotspots including Endemic species and non-endemic bird species.

Activities to do in Queen.

The best exciting and most prominent activities done while in Queen include, Game drives around the suburbs of the Park, Launch trip cruise along Kazinga Channel, Chimpanzee tracking in Kyambura gorge, and bird watching.

Where to stay in Queen.

Don’t be scared of where to stay on a visit to this Park in South Western Uganda because it’s geographically situated with different accommodation facilities ranging from camping to self-contained rooms which are reserved for tourists to stay at affordable prices. These accommodation facilities are categorized into three including budget, mid-range, and luxury facilities. Enjoy your time as you visit wonderful park  in the Southwestern part of Uganda.